Last weekend, the Tongass Democrats (TDs) hosted the Alaska Democratic Party’s (ADP) winter Statewide Central Committee (SCC) meeting right here in Juneau. It was a great 3-day gathering of Democrats working hard on our primary mission, which is to elect Democrats to further our progressive values. 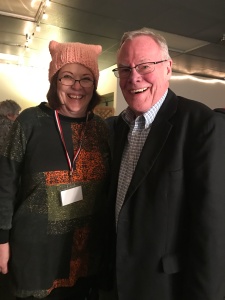 And we had lots of fun too!

In previous Chair’s Corner posts, I explained the makeup of the Alaska Democratic Party (ADP), the Party Plan of Organization (PPO, aka Party Plan), Party Platform, organization, and functions.

In this Chair’s Corner, I had intended to explain why all of this matters to you, but that is going to need to wait another week.

Instead, this week I want to share some of the highlights of our SCC meeting weekend. It will give you a greater sense of the Party and what we do, before I move on to, “Why it matters to you.”

With several adopted amendments and some clean-up work still needing to be done, the Party Platform document is not quite ready for publication today. When it is, rest assured that we will get it posted here on TongassDemocrats.com.

The new Party Platform is much longer than the previous version, and it encompasses a much broader array of issues and topics. As a result, it showcases the more complex values of our growing party.

New Caucus on Faith
We have adopted a new Tier 1 issues caucus called the Faith Caucus; see here for an explanation of what Tier 1 means. The Faith Caucus welcomes party members of all religions, agnostics, and atheists to better engage the ADP around the area of faith.

Stay tuned for more information on the new Faith Caucus!

New Officials
Due the sudden and unexpected passing of our Party Secretary, we had to elect a new person to take on these duties. Katherine Pfeiffer of Anchorage was elected and will serve until May of 2018. The Party Secretary takes minutes of all ADP committee meetings. 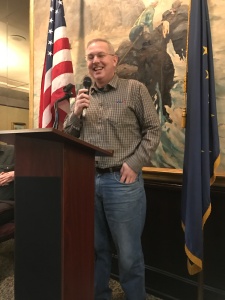 In order to reach gender balance on the SCC, we elected four new female at-large members from four regions in the state. Nadine Lefebvre of Juneau House District 34 was elected one of the SCC at-large members. Congratulations, Nadine!

The Tongass Democrats now have nine members serving on the SCC (ten if we include our Southeast Regional male Vice Chair who resides in House District 34)!

A Chance to Learn
In addition to the all-day business meeting, we had sessions on Roberts Rules of Order, New Officer Orientation, Party Goals, a presentation by a representative from Everytown For Gun Safety, and breakout sessions of our five Tier 1 issues caucuses.

A Chance for Fellowship
Then, on top of all the official stuff, we also had some fun time too! 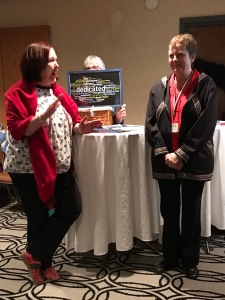 This year we got to recognize a very special past Mary McKinnon Fund recipient, Kay Brown, who served in the Alaska Legislature from 1986 to 1996. Kay is also ADP’s outgoing Executive Director.

The Alaska Young Democrats presented Kay with a word cloud montage from ADP members to express our sincere gratitude for Kay’s dedication to and leadership of the ADP since June of 2011.

Thank you, Kay! We miss you already!

We also had the great honor of having House Speaker Bryce Edgmon as our keynote speaker, as well as hearing from our District House Reps. Kito and Parish. Nothing better than a room full of Democrats gathered with the new Alaska House Majority Coalition leadership and members! We thank them for their leadership in working to correct Alaska’s fiscal crisis, and we will do all we can to support their efforts.

Volunteers running the January 2017 fundraising auction. Thanks for your help – we couldn’t do it without you!

Finally, the highlight of the weekend was the Democratic Auction! Over 100 people attended this Tongass Democrats’ annual fundraiser at Rockwell.

We had locally renowned auctioneer Jesse Kiehl, and live music by Tom Locher and Wayne Norlund. We also had amazing silent and outcry auction items donated by very generous Democrats, all making for lots of fun—and funds raised too!

So that’s the SCC meeting weekend wrap-up! As you can see, the ADP and Tongass Democrats accomplished a lot of work, all the while having lots of fun too!

Stay tuned next week to hear why this matters to you.

Note: This post has been updated with some grammatical edits that were left out when I originally published it. – Mary